Is It Expensive To Own A Dog In M’sia? Here’s An “Agak-Agak” Estimated Cost.

Pooping. It’s the butt of elementary school jokes and makes top of the list for dinner topic taboos. Despite its reputation for ruining one’s appetite, it’s actually a pretty important indicator of our own and our pets’ digestive health.

While poop is generally smelly, your pets diet does determine its stink levels and amount. For example, dogs who typically consume processed kibbles would produce poop of seemingly larger amounts with more stink as compared to dogs on a raw food diet.

Reason being, a dog’s digestive system is unable to absorb the high starchy fiber content in kibbles. Hence it can sometimes feel like your dog is producing more poop than what was eaten.

On the other hand, the nutrients in raw food would be better absorbed and digested thus producing lesser, smaller, firmer and significantly less stinky poop.

Other than the smell and amount, the color and texture of your dog’s poop are telltale signs of your furkid’s health. Therefore it is important as pet owners to be observant as our dogs would not be able to verbalize their tummy aches or internal problems.

To make things simpler, here are the 4C’s that matter in examining your pup’s fresh poo as said by veterinarian Jessica Vogelsang.

On the scale of hard pellets to runny, a normal dog poop consistency should be moist and firm enough to pick up.

Dry or overly firm stools may be a sign of dehydration or decreased interstitial movement. This could increase the occurrence of constipation or discomfort while pooping, so you might see your pet struggling a little while pooping.

In terms of soft or watery poop, we know the panic that ensues when we notice a brown puddle in the litter tray. It’s generally fine if it happens as a one-off episode, but should it persist, here’s a rough idea on the different types of diarrhea and whether you should be worried.

Do note these are referring to brown colored watery poops. Read on for more explanations on the different colors of diarrhea.

Similarly to humans, poop should not have any form of coating. Dog poop should be easily picked up without leaving any residues. Hence a coating of mucous usually occurs due to large bowel inflammation and with diarrhea. However, a soft stool containing or coated with mucous could be signaling the presence of parvovirus or parasites.

You know the saying, “You are what you eat”? When it comes to evaluating the contents of your dog’s poop, do keep an eye out for anything extremely out of the ordinary. Some concerning content would be such as:

A healthy poop color should be chocolate brown and it’s normal to panic when we see a different colored poop in the litter tray. That being said, here’s what those colors could indicate.

Level 2: Calmly ring up your vet and schedule an appointment

Level 3: Stay calm and safely get your furpet to the vet ASAP!

Overall, a healthy dog poop should be brown, firm, log shaped and easy to pick up. Besides monitoring their pooping frequency, volume and habits, here’s a visual guide to help you determine if your dog’s poop is healthy. 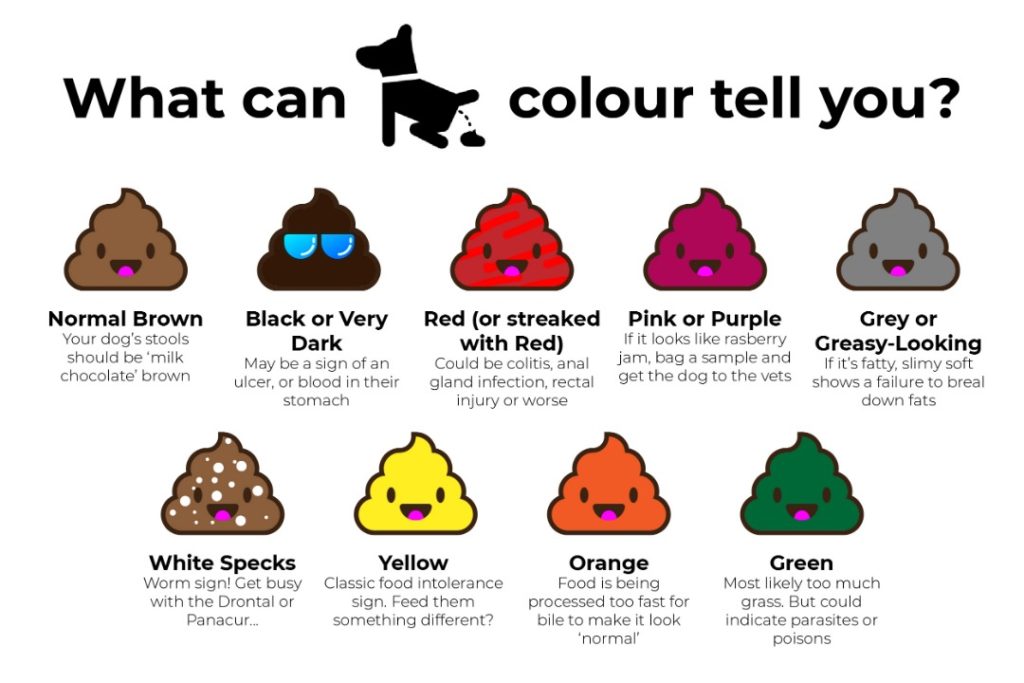 If your dog has no serious illness but its poop still looks off, it’s time to seriously consider a change in its daily meals. You could speak to a Petchef Advisor to get a recommended diet for your pet. And of course, always remember to wash your hands after cleaning up your dog’s poop!

The Malaysian weather is either too hot or too rainy. Sometimes it’s both in a day. And although we may not be covered with...

Rabies is a disease that has earned its street cred for legitimate reasons. Everyone knows that it’s a deadly and highly infectious disease that...

As gross as it sounds, it happens more than you’d think it does. Stool-eating, which is also known as coprophagia, commonly happens in rabbits...